I decided to start a new blog for my project to document visits to all 100 counties in North Carolina, which I started late last year. I've dubbed it the North Carolina Odyssey Project, and I've visited 6 counties so far. Initially, I was putting the posts about my little trips on this blog. When I decided to start a different blog, I experimented with transferring the posts over to the new blog. It took longer than I expected to switch one post (Alamance County) over, with all the pictures, so in the end, I decided just to supply the links for the other county posts. Then I started fresh with my trip around Orange County last Sunday afternoon.

Read all about it here. And if you have any suggestions of places I should visit, I welcome interesting ideas.
Posted by Lesley Looper at 5/28/2008 1 comment: 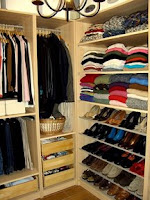 I got on a big roll this afternoon and started weeding out clothes from my closet. At first, I thought I'd just add to a pile I'd already started, but the pile grew into a mountain! Wow! Some of the clothes, all too big for me now, were easy to discard, but other pieces were harder to give up, for various reasons. I piled everything into 5 large trash bags, and loaded them into the car with George's help. Then I took the bags immediately to the nearby Goodwill store.

My closet looks so much better now, not as good as this closet (not mine)on the left, but better than before.
Posted by Lesley Looper at 5/26/2008 4 comments:

This afternoon, George had some bananas that were sooo ripe ("how ripe were they?!") that I just had to revisit last Sunday's cookie recipe. This time, however, I added cinnamon (at George's good request) and walnuts (my bright idea), and they're even better than last week! Now, there may be something to the fact that being in the middle of a holiday weekend that makes nearly everything better, but we'll see! ;-)
Posted by Lesley Looper at 5/24/2008 No comments: 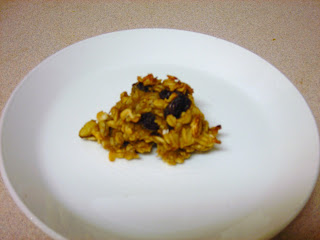 I decided to make some cookies this afternoon. It seemed like a fun Sunday afternoon thing to do! I tried a new (to me) recipe for banana-oatmeal cookies. I wish I could remember where I got the recipe, but I saw it somewhere online in passing, and decided to put it in my virtual recipe box on desktopcookbook.com. Today was the big testing day. They taste good, and made the apartment smell even better!

Here is the recipe (which is oh, so simple!):

Monday morning update: After trying them warm, and again this morning, George and I think they turned out well, but adding cinnamon, and maybe chopped nuts (walnuts? almonds?) might make them even better. I'll make them again and experiment.
Posted by Lesley Looper at 5/18/2008 2 comments:

Yesterday, George and I found ourselves in Alamance County. We stopped in Mebane (population about 9,000) first, where I joined the credit union that George joined last week based on where he works. Although I already do the credit union thing from my own job, I decided it wouldn't hurt to have a little cashola tucked a little (but not totally) out of reach. It also gave us a chance to open a joint savings account, which was a step in the right direction for our financial future as a couple. (We've been together five and a half years, living together for the past 11 months.) Our opening balance in the joint account is minimal, as we haven't decided how we're going to deposit money in it, what we're going to save together for, anything like that. We have time to decide, though. Not stressing over it. 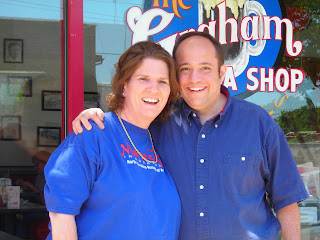 Afterward, we went to nearby Graham, another small town. (With a population of about 14,000, it's not the largest city of the county, but it is the county seat of Alamance County.) George has been there for lunch a couple of times, and he wanted to show me around. It's a quaint little town, at least what we saw of the downtown district. The courthouse stands in the middle of the round-about traffic circle, with various side streets and businesses around. We ate in a cute little place called the Graham Soda Shop. It's a quaint place with that old soda shop appeal. I got a salad and a baked potato, a pretty healthy meal. My only gripe is that the salad came with bacon bits, which weren't listed as an item on the salad, or I would've had them leave the bacon bits off (not a big fan).
Afterward, George and I walked around and poked our heads into a couple of places. On our way back to the car, I decided I wanted to get a shot of the Graham Soda Shop sign, so I asked George to stand beside it. I was pulling out my camera when a lady walking by offered to take a picture of us together (the picture above). That was very thoughtful, so we agreed. Other than needing a comb for my hair, not a bad shot! :-)
Posted by Lesley Looper at 5/18/2008 No comments:

What I've Learned (So Far) From Cleaning Out the Pantry (and the Freezer...and the Refrigerator)

Well, I'm into my third day in a row of not going to the grocery store for more food, cleaning supplies, or toiletries. I've discovered several food items that I'd bought to try, but they'd been pushed to the back by the foods I've gotten into the habit of eating. For instance, I'd bought several cans of Eden canned beans, as they are organic and don't have any added salt. I've eaten them for several meals this week, often added to my rice, and I've really enjoyed them.

I've also enjoyed some fresh squash from the Duke Farmers Market that I had in the refrigerator, though I had to toss a tomato from a previous DFM visit that had gone bad. Blah, I don't want to keep doing that! (I love tomotoes and can't believe I let a fresh one go bad!)

It's been nice going straight home after work, too, though I have been staying later at work, so I haven't been getting home any faster. Although the grocery store I frequent most is right across the street from my apartment complex, so it's not out of the way, I suppose I'm saving a little gas, and some extra cranks of the ignition.
Posted by Lesley Looper at 5/14/2008 4 comments: 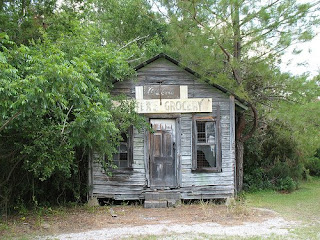 After glancing over my grocery store purchases of the past few weeks, I've decided to try to minimize my trips to the grocery store for the next two weeks, purchasing only things I run out of and must replace. I've discovered I've become a little hoarder of sorts with the food and beverage items I prefer, so now I have several bags of rice for example. I stocked up on canned pineapple over the weekend as well. Lots of it! (Okay, so I love pineapple.) I also bought a bottle of ground cinnamon, thinking I was about to run out, but it turns out I already had a spare bottle in the cabinet. (Of course, that's what I get for not checking before I left home!) Now, a bottle of cinamon is less than $3, and I will use it in time, but I didn't need it now. Purchases like that add up.

Late this afternoon, we met up with my parents, and joined George's family (which included his grandfather, parents, Henry, Phil & Heather plus their two children, and Elaine) at MacGregor Downs Country Club in Cary for the buffet dinner. The food was yummy and the company even better! Afterward, we went by Pappa's home for drinks and more conversation. It was such a nice time! My family and George's haven't had much interaction, so I'm glad it went so well.

Mom and Dad also got to meet Pappa's helper, Thomas, who is from Zimbabwe. Mom and Dad visited Zimbabwe eight years ago, so they all enjoyed talking about the country.
Posted by Lesley Looper at 5/11/2008 No comments:

I had the "Today Show" on this morning as I got ready for work, and they had the Duggar family on with their 17 children! During the interview, the parents announced that # 18 is on the way--holy cow! I've seen segments about the family on the Discovery Health Channel, and it is fascinating to see how they run the household, homeschooling all of the children. (Not sure what the 20-year-old oldest child is up to, school-wise.) In addition to helping maintain the home, each child seems to have hobbies, and all of them learn how to play the piano and the violin. I was fascinated by all of that.

In sports news, an 8th grader has been offered a basketball scholarship (once he graduates from high school) to the University of Kentucky. Part of me thinks, "Holy cow! That's so young to commit to a school and a basketball program!" On the other hand, he's got a goal in hand that should really give him some focus through high school--not a bad thing!

In personal news, tomorrow's my first training run with the Galloway training group. I'm very excited, but a little nervous too. I'm wondering how things will be organized, and if I can keep up with my pace group. When I think about being able to run a half or full marathon come November, I think, "Holy cow!" again! :-)
Posted by Lesley Looper at 5/09/2008 1 comment:

Ten on Tuesday: 10 Places I'd Love To Travel To (That I Haven't Gone To Yet)

I thought this sounded like a fun meme! This list is in no particular order, and is shorter than I'd like for it to be. There are so many places I'd love to visit!


Other places I'd love to visit: Alaska, India, an African safari, Iceland, Scandinavia, Australia/New Zealand, Key West, Israel, and the Great Wall of China. I know this list will continue to grow!
Posted by Lesley Looper at 5/05/2008 2 comments:

I went to hear Jeff Galloway yesterday morning at the kick-off for the 2008 Galloway Training Group in Raleigh. It was very interesting and inspiring. At the end, I decided to go ahead and sign up! One of the interesting little side benefits of signing up there was that I got one of Galloway's training books (among other things), and was able to meet him and have him sign the book. Better yet, I met some really nice people while waiting in the line to see him!

For a more complete count of the morning's activities, check out yesterday's post at my running blog.
Posted by Lesley Looper at 5/04/2008 No comments:

The Life of the Party 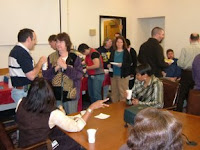 Yesterday I checked out some pictures posted of a March farewell party for a colleague who was moving to another department. (The party took place the week after I fell and broke my nose, but before I had it reset and bandaged up.) Lo and behold, I made it into one of the candid shots, though I wish I hadn't! I'm in the middle of the picture here, with the teal top, black jacket and khaki pants. If you click to enlargen the photo, you can see the scrape down the side of my nose and on my chin. The expression says it all, though. I was pretty uncomfortable; I can't believe I even went to the party, feeling like I did! (I guess I was looking for a diversion.)