Okay, I Watched It!

I finally saw the movie "Twilight" over the weekend. George and I watched a loaner DVD of the movie together. George hasn't read any of the Twilight books, and he didn't like the movie AT ALL! I've read Twilight and Full Moon, and had mixed feelings about the movie.

Things I Liked About the Movie:
*The greenery was very pretty! I loved the lushness of the forests, and it was fun to recognize Multnomah Falls, which I visited many moons ago.
*Speaking of the set/scenery, I thought the Cullen' house was pretty neat, with all the glass.
*Bella whines much less in the movie than she does in the movie. (Uh, thank goodness!) She also seems less clumsy in the movie.
*I thought the casting was interesting.
*The movie was a Reader's Digest version of the book, with some scenes, issues, and the whining all condensed. Big plus in my book. I thought Twilight (the book) could've ended much sooner than it did.

Things I Didn't like About the Movie:
*It still came across as very "high schooly," especially the dialog. Okay, I KNOW the characters are in high school, but some of the dialog was cheesy, even for high school.
*Edward comes across as pretty darn smug, rather than aloof, to me. Same as the book.
*The movie seemed pretty low-budget for such a highly popular book series.
*Bella's character would come across better if she didn't have to come across as clumsy at all, I think. The times she did stumble in the movie seemed a bit forced. ("Oh, that's right, my character is supposed to be a klutz!") If I didn't know her character was clumsy in the book, I would've thought they'd forgotten to do some editing.
*I don't think the movie really explained Edward's showing up in Bella's room while she slept. Just happened. Still creepy to me, not romantic.

Overall, I'm glad I saw it as a cultural reference, but....*sigh* it didn't make me any more of a Twilight fan. I keep coming back to my feeling of relief over the fact that it took me less time to watch the movie than it did for me to read the book. Like Harry Potter, I'm glad the young adult audience has found another series of thick books to sink their teeth into, but it's been a challenge for this fortysomething to follow suit here.
Posted by Lesley Looper at 7/28/2009 2 comments:

The Week That Was

Today I went to the TRLN Annual Meeting that I mentioned in last Friday's post, and really enjoyed it! The keynote speaker talked about digital projects; afterward I chose a breakout session that featured two speakers: one who talked more about the future of digital projects in the university setting, and the other who talked about Green IT, or the environmental and university impact of going green with library/campus IT. Both presentations were full of interesting information, BUT the first presenter read a lot from his Power Point presentation. The second presenter did a lot of well organized ad libbing, mostly because he had more colorful images as examples in his Power Point presentation. (Note to self--remember this!)

After the break out session, we went to the yummy buffet lunch, and heard Karla Holloway, a Duke professor and author, speak. She gave a witty talk about her book, which was about reading and how reading has affected people, including writers and blacks. Interesting.

Earlier this week, I gave the book New Moon away to a coworker who'd just finished reading Twilight. I saw her today at the TRLN meeting, and she handed me her Netflix copy of the movie, "Twilight," to watch! Okay, I didn't much like the book, but I continue to be curious about the whole phenomenon, so I'm looking forward to watching the movie! (Thanks, TC!)
Posted by Lesley Looper at 7/24/2009 1 comment:

I just pre-ordered the paperback copy of Stephanie Meyer's Eclipse, the third book in the Twilight Series, with mixed feelings. I finished Twilight earlier this month, and didn't like it much at all! I finished New Moon over the weekend (I'd already bought it, so I decided to go ahead and read it), and liked it a little better. Now I'm hoping the series will continue to warm up for me. For those of you following the Twilight Series, it looks like I'm in the Team Jacob camp so far.

I continue to be curious about the hold this series has on people. Teenage Bella seems to be at her worst when she's with Edward, vampire extraordinaire: klutzy, whiny, clingly, and dependent. Edward's family seems to accept all of this, and they remind her of her own awkward self at different times throughout the first two books. When Bella befriended Jacob (who turns into a werewolf in New Moon), she became more self-confident and adventurous. That's why I liked New Moon better--Bella became a much more interesting and well-rounded character.

I'm such a horder of books I want to read, that I am beginning to get a little overwhelmed by all the unread possibilities on my bookshelves at home, not to mention my Amazon.com Wishlist and my to-read list on Goodreads.com (there is some duplication between the two lists, but not totally). While many of the books I have at home are personal copies, many are library books (both university and public). I recently decided to start weeding books out a bit, so that I can focus on what I really want to read for a while, and make my home office a more comfortable place to read, write, and relax in the evenings. Recently, I took a few personal books I didn't want to keep to work to share with my colleagues, with the promise that I didn't expect (or even want) to see them again. This afternoon, I returned a bunch of books to the public library that I'd either finished or decided I could read later on down the road. While my bookshelves are still double-stacked when possible, and now-smaller stacks of books still abound elsewhere, my home office is looking more airy, relaxing, and productive. I feel like I have a little more focus.

Meanwhile, I have a total of seven (SEVEN?!) books in various stages of ordering and shipping at Amazon, so I'm hoping to finish up some other books at home before they arrive! Three of those books are released for shipment in August, and another won't arrive until late October, so I'm hopeful that I can make some progress between now and then. Three of the seven will arrive this week, though. I'd better stop writing and go read for a while! :)
Posted by Lesley Looper at 7/19/2009 5 comments:

No Doesn't Always Mean No

This morning, I realized I'd missed the deadline for signing up for the TRLN Annual Meeting next week. A coworker had asked if I were going, in hopes that we could hang out together. :) I remembered that I'd emailed my boss, asking her if I could attend, and I never heard from her. I was a little bummed with myself that I hadn't followed up with her in time to make the registration deadline. I enjoyed this meeting last year, and had been looking forward to it again. I thought I was out for the count.

I sighed over it for a bit, and vowed to follow up better next year. Then I decided I wasn't ready to give up for this year! I found a contact person on the TRLN website, and asked her if it were possible to at least attend the morning sessions, if not the lunch. As luck would have it, I heard back from her almost immediately saying she could get me in, and that I needed to respond with my breakout session preference, and if I wanted to stay for lunch! Yessss!

So then I tracked down my boss, who said, "Uh, sure! I assumed people would just sign up if they wanted to go!" (This particular meeting is free of charge, and in a nearby city, but it is time offsite and different from the normal work routine, eventhough it is work-related.)

I emailed the TRLN contact back gleefully, happy with myself that I hadn't given up so easily. It's a minor victory, but a nice way to end the work week. 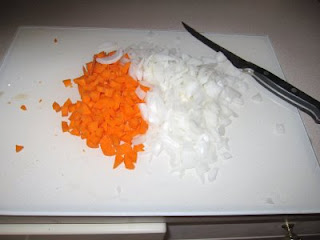 One of my goals for this year is to do more cooking, so I decided to try a new recipe from the cookbook 366 Delicious Ways to Cook Rice, Beans, and Grains. I bought this cookbook in the spring of 2008, and I think this is the first recipe I've tried from it! I decided on the "Brown Rice and Lentils" recipe on p. 329, went to the grocery store, and came back with several goodies!

For starters, I didn't have a large skillet with a matching top! I was also missing the spices cumin and coriander in my spice rack, and I also picked up lentils, fresh cilantro, and fresh scallions. 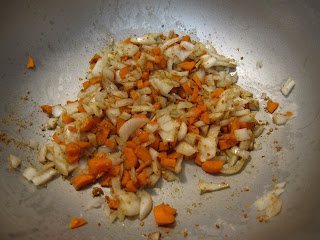 Here, I sauteed the fresh carrot and small onion (in the first picture) in olive oil, and added the cumin and coriander. Yummy smell already at this point! 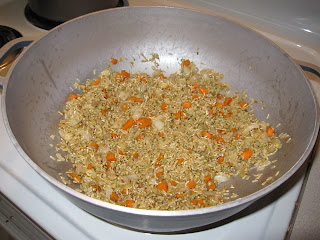 Here, I added the uncooked brown rice and lentils, and sauteed a little more. I added four cups of water, put the lid on and brought it to a boil. Then it simmered for 40 minutes. 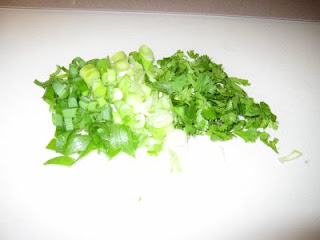 The scallion and cilantro got mixed in at the end, and the whole enchilada had to sit under a paper towel for five minutes. 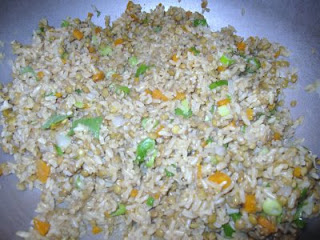 And voila! It tastes really good, and the recipe made several servings! Can't wait to have it for lunch this coming week!
Posted by Lesley Looper at 7/05/2009 2 comments:

I just checked the website for the Outer Banks Marathon, and it's only 125 days (plus some hours and seconds) away! Wowee! I'm both excited and nervous about it, to be honest. I'm excited because it'll be my first marathon, but I'm nervous because I've been kinda struggling with the long runs lately. I must be patient, and continue to prepare for it. Well rounded training includes good nutrition, hydration, and sleep, as well as exercise.
Posted by Lesley Looper at 7/05/2009 1 comment: