I decided last week to start rewarding myself each time I get lose weight and surpass a number ending in 5 or 0. Earlier this week I passed a number ending in a zero, so I ordered three books from my Amazon.com Wish List. They arrived yesterday, and I've been having fun with them already!

One book is called Start Your Own Newsletter from Scratch, by Jim Terhune. I got this book because I'm planning to start a newsletter for my McLamb family line. (Genealogy is one of my favorite hobbies.) It's a fairly short book; in fact, I finished it last night! It has lots of good suggestions, even if it is a little dated in terms of technology. (It mentions modems for getting online.) I got the last copy in stock, so I'm glad I went ahead and ordered it.

One of the books I got is a cookbook called 366 Delicious Ways to Cook Rice, Beans, And Grains. I've already earmarked several recipes I want to try! I love the fact that nutritional values (including sodium) are listed at the end of each recipe. Sodium is often left off of nutritional charts of recipes, it seems, so I'm thankful for it in this book.


The last book I got is about running! It's called Marathon Woman: Running the Race to Revolutionize Women's Sports, and it's an autobiography of Kathrine

Switzer, who was the first woman to register and get an official number for the Boston Marathon, but the race officials didn't know she was a woman until she was running in the race (a race offical actually tried to run her down!). This was in 1967,when women weren't allowed to run in marathons! I'm a couple of chapters into this book, and I think it'll be a good read! I'd love to run the Boston Marathon someday, and am thinking about signing up for a marathon training program (thanks for the link, Susan!) that starts next month.
Posted by Lesley Looper at 4/26/2008 3 comments:

Last evening, I went to Trader Joe's after work to pick up a few things. This is the third time I've been to the Chapel Hill store, and the third time I've been impressed by the speediness of the check out line. Amazing! I picked up some more of their yummy low-sodium marinara sauce (under the Trader Giotto's label), and got some more Diet Hansen's. I decided to try a new flavor, so I picked up some mandarin lime. I tried it this morning, and it was yummy, but low and behold, it turned out to be regular instead of diet. :-( I'll look for it in diet next time.

As I was leaving the shopping center, I pulled up behind the cars in the turn lane at the red light, and the car in front of me looked like one of Mom and Dad's cars. My eyes went to the license plate, an Alabama tag from Dallas County, and I realized it was my mom in the car! She and Dad have been in town for a couple of weeks, and Mom had been over at Talbot's, which is across the parking lot from Trader Joe's. I honked and waved, and she finally recognized me! She called my cell and we had a nice talk, laughing about the coincidence. She and Dad own a place in Durham, and it's a nice place for them to stay while they're in the area. We'd just had lunch a couple of days ago. They're heading back to Alabama today.
Posted by Lesley Looper at 4/25/2008 No comments:

From the Archives: Cherokee, NC 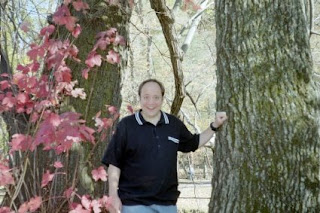 I just ran across this picture of George, which I took in October 2006, when we visited the North Carolina mountains. We had lunch in a city park in Cherokee, NC, where this shot was taken. This is one of my favorites of him.
Posted by Lesley Looper at 4/24/2008 No comments:

An Afternoon in Raleigh

Yesterday, George and I had Sunday brunch at Irregardless Cafe, a restaurant in Raleigh. I had a yummy garden (i.e. veggie, including tomatoes and avocados) frittata, and George had the chef salad. It was the first time we'd been there, and I really enjoyed it. It's colorfully decorated, and had live music. From there, we went to see the musical "Spamalot," which won the 2005 Emmy for best musical. The tickets were an anniversary present for George, who grew up on Monty Python. I did not, but we both enjoyed the show a lot! We saw friends Melissa and Robert there, to boot.

Afterward, we drove home and had a few minutes to power down before

heading back to Wake County, where we celebrated Passover with George's family in Cary, a neighboring city of Raleigh. It was good to be with everyone, and I especially enjoyed talking with George's 14-year-old cousin, Jake. I first met Jake when he was every bit a 9-year-old boy. For the first time, we found a common interest in running, as he's joined his school's track team, and plans to run the Peachtree Road Race with his father this summer. It was nice to finally be able to talk with him about something besides his school. ("What grade are you in this year? What's your favorite subject?")

After being home sick since Thursday, it was nice to be around people, but there wasn't much down time, and I returned to work today a little worn out. It's been an especially long afternoon, and George and I have a covenant group meeting tonight. *sigh*
Posted by Lesley Looper at 4/21/2008 No comments:

ICO, the company my brother-in-law is president of, launched a satellite from Cape Canaveral earlier this week. Lisa, my brother-in-law, and the girls all flew down to watch. Found out today that the launch is on youtube.com! It's very cool to watch! Fast forward to about one minute before launch.

I started getting a sore throat yesterday afternoon, but I tried to ignore it (hoping it was allergies or something). This morning I woke up convinced I had strep! I slept in, and got to the doctor about 8:15. They did a throat culture, which came back negative for strep, so she said it's probably a virus. (They did a second culture to send to the lab just to make sure.) I was relieved not to have to take more antibiotics! I stopped by the store on the way home and stocked up on items to relieve the symptons, and have been puttering around for the rest of the day.

Although I hate being sick, and there's much to do at work, I have enjoyed getting the extra rest, and eating soft foods (though I've stayed away from ice cream, one of my old vices!). I've also gotten some reading and genealogy done, as well as laundry.
I just hope I'm good to go for the weekend, as we have a busy one. Saturday we're scheduled to help paint a building at church with our covenant group. Saturday and Sunday night we have Passover dinner with George's family, and Sunday afternoon we have tickets to see "Spamalot" in Raleigh.
Posted by Lesley Looper at 4/17/2008 1 comment:

Back into the Race

I had fun running (and walking) the Cary Road Race 5K this past Saturday! My race report is here.
Posted by Lesley Looper at 4/14/2008 1 comment:

It's been a little while since I've done a "10 on Tuesday" list. I thought this was a good one. The list below is in no particular order, and it's a moving target. Names could move into and off of my list later today or next week. Here it is for now:

Who would YOU list as your top ten favorite actors and actresses?
Posted by Lesley Looper at 4/08/2008 No comments:

Looking Forward to: A New Hairdo

I've had a busy few days, and have missed blogging. On the "funk" front, I made an appointment with a master hairstylist/colorist to get a new do the end of April. (I called a week or two ago, and I couldn't get in until the last week of April! Yikes, he's busy!) My experience over the past couple of years with new hair stylists is that I go to someone new, get a great first cut, but then they go downhill from there, and my hair just goes blah. I'm wondering if you really do get what you pay for when it comes to a haircut. Anyway, I'm not getting my hair colored yet, just a cut, and quite possibly a new style. The person doing my hair comes highly recommended, so I'm excited! I'll post pics after the appointment!
Posted by Lesley Looper at 4/07/2008 No comments:

Looking Forward to What?

I've been in a bit of a funk today, so I went for a walk after I got home and figured out part of it. For a number of months I've had a rolling list of things to look forward to, and now I'm looking-forward-to-less! I don't have anything kinda big that I'm really looking forward to. There are little things out there, like having lunch with my niece tomorrow and with a co-worker on Friday. I even look forward to each day in a general way. I look forward to seeing George at home after work. But I'm missing some big things to look forward to!

I was looking forward to several road races until my groin strain, followed by a broken nose. I missed a couple of races that I'd signed up for and was really looking forward to. Now I've got another race coming up in a couple of weeks, and I'm a bit nervous about it. I've signed up for a half-marathon in November, but that feels like a big question mark now.
I looked forward to treating George to Easter brunch at Brasa (which was a secret until we pulled into the shopping center), and that was fun! I was looking forward to getting my nose splint off. It was a relief when that happened, but my nose still hurts a little.
I'm thinking I need to plan something, make a goal and start working on it, hopefully something sooner than the November half marathon. Better yet, map out several goals in different areas of my life, not just running races that count on me being injury-free. Some goals for me, and some with George.