I got a confirmation email from REI this afternoon about my membership with the store. Yes, for $20, I became part of their co-op. It just seems like an excuse to get a discount or cash back down the road, so I don't quite get why REI calls it a co-op. It reminds me of the Barnes and Noble membership thing, though with a different discount schedule.

At any rate, I'm glad I joined, since it's just a one-time fee, and REI is a cool store, indeed. It kinda fascinates me, as the store near Southpoint looks pretty unassuming from the outside, but it has all sorts of neat things on the inside. Part of the attraction for me, I think, is that for a number of years now (maybe about 15 or so!) I've thought it would be really cool to hike the Appalachian Trail. Being in REI inspires me a bit more. Meanwhile, I'll enjoy purchasing Gu Gels, SportsBeans, and little gadgets and gizmos I may find there.
Posted by Lesley Looper at 6/30/2008 No comments: 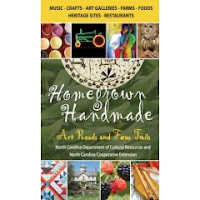 A couple of evenings ago I went to hear Joe Newberry speak about his book Homegrown/Homemade: Art Roads and Farm Trails at the Regulator Bookshop in Durham. A co-worker, who gets regular emails from the Regulator about upcoming events, tipped me off about this book reading and signing, and I'm glad she did! The book chronicles places to go in rural North Carolina that deal with local arts, crafts, and food, and Peggy had heard the story about my quest to visit all 100 counties in North Carolina, so she thought I might enjoy it. I love any excuse to go to the Regulator, so off I went.

In addition to reading some from his book, Newberry also showed some slides from travels to write the book, which was edited by the North Carolina Cooperative Extension and the North Carolina Department of Cultural Resources. He saved time for some Q&A at the end, and also played some tunes on his banjo, guitar, and fiddle (though not all at once!). All in all, a neat way to spend an hour on a warm summer evening.
Posted by Lesley Looper at 6/26/2008 No comments:

10 on Tuesday: 10 Favorite Moments in Your Country's History

When I saw this meme in my inbox this morning, I thought it was a cool one! However, I'm having a hard time coming up with TEN favorite moments! Can you help? Here's my list so far (in no particular order):

December 1, 1955-Rosa Parks refused to give up her seat on the bus

April 19, 1967-Kathrine Switzer became the first women with a numbered entry to run the Boston Marathon
Posted by Lesley Looper at 6/17/2008 No comments:

Today's been a happily social day! I enjoyed talking with my dad and mom most of all, but it's also been a social day in other ways.

George and I went to ERUUF this morning, and it was the first time there's just one service instead of two. This is our new summer schedule, and I went to coffee hour afterward in hopes of meeting some "new" (to me) people who normally attend the earlier service. I ended up meeting two guests, and that was a treat. Each person was interested in hearing about our covenant group program, so I enjoyed giving my two cents there.
Afterward, Amy and I met for lunch at Saladelia's, and George joined us after he finished up with coffee hour training. We ended up eating and talking for over two hours! While we were there, some Scrabble players came and set up in the back of the restaurant with some fancy twirling boards (like a Lazy Susan) and timers (at least I think that's what they were). It was fun to watch them from our table out of the corner of my eye (I was trying not to be rude to Amy and George!).
This evening we're meeting George's family for Father's Day dinner (plus Henry's birthday) at Biaggi's. I've never been there, so I'm looking forward to trying a new place.
Posted by Lesley Looper at 6/15/2008 No comments:

Friday the 13th never has bothered me, mostly because I like Fridays! I've never been particularly superstitious, though I do like good ghost stories and the idea of (good) haunted houses. I've never "seen" a ghost, but Halloween is one of my favorite holidays.

Plans for today? I've already worked out, and I'm heading to work shortly. Being mid-June, we are busy trying to finish the fiscal year. I'd hoping to get home a little earlier tonight, as I've been working late all week, and I'm feeling a bit weary. I'm looking forward to a relaxing evening at home with George.
Posted by Lesley Looper at 6/13/2008 No comments:

Getting Ready for Tomorrow 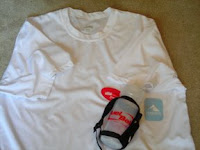 Last evening I finally made it to Fleet Feet in Carrboro before it closed at 7:00. I was glad to find they did indeed have a small water bottle that I can carry in my hand for long runs. (On my last long run, I tried a hydration belt with a bottle in the back, and it drove me nuts!) I also received my new wicking t-shirt in the mail a couple days ago (something I found on Amazon.com--amazing what they have on their website now!), so I'm hoping I'm ready for tomorrow's 8-mile run with the Galloway training group. I've never gone 8 miles on my own two feet, so I want to be ready (especially with the predicted heat!). 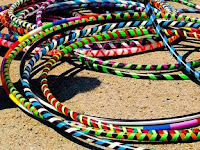 I enjoyed riding around Carrboro for the first time in quite a while. It reminded me of the summer I lived in Carrboro while going to summer school at UNC. I strained my brain to remember what was there 20+ years ago, and what's new. One place I saw that I want to return to is Weaver Street Market. Last evening they had a band playing out front and lots of people sitting in lawn chairs and on blankets, enjoying the music. (There were also a number of people hula hooping to the music!)
Posted by Lesley Looper at 6/06/2008 1 comment:

What I've Been Reading

I've enjoyed reading more lately, something I've been meaning to do for a while but have let my free time be gobbled up by other things. Earlier this week, I finished the book, The House at Midnight, by Lucie Whitehouse. It's her first book, and for a debut novel, it's a good one. Once I got into it, I really enjoyed it, and right after I finished it, I thought, "Good book!"---but with some nagging something or another. I think I was expecting a little more character development and conflict resolution that didn't quite happen like I was hoping. For instance, I never quite figured out why the book has its title. Yes, the house gives the protagonist a sense of forboding throughout the book, and the house seemed a little creepier at night, but I don't recall midnight being a magical hour, or the time stamp of a riveting scene. There were a few instances like where some of the connection seemed to be missing. (Maybe that was supposed to be part of the suspense.)

One reason I picked it to read is that I'd seen it was compared to Donna Tartt's The Secret History, one of my favorite books. The House at Midnight wasn't quite up to that standard, but I can see the comparison, since it revolves around a group of college friends and include big houses (The house doesn't play as big a role in The Secret History.)
Posted by Lesley Looper at 6/04/2008 No comments:

After church today, George and I joined members of the congregation for ERUUF-wide picnic at Eno River State Park--the section off of Roxboro Road. I'd forgotten how nice it is there, and we had a nice time. The food (potluck) was varied and yummy, and we enjoyed catching up with friends as well as meeting new (to us) people. One couple actually visited ERUUF for the first time today, saw the news about the picnic in the bulletin, and came on out. I was impressed by their willingness to jump right in and get to know the congregation outside of the normal Sunday morning routine. I also enjoyed talking with them about South Dakota, their home state. I've actually been there, and it was fun recalling memories of Mt. Rushmore, the Badlands, Custer State Park, and Wall Drug.

After George and I got home, I decided to drive to Chapel Hill to stock up on Hansen's Diet Pomegranate at Trader Joe's, and they were all out! Wahhhh! I even asked at the customer service desk, and they'd gotten a new shipment in last night--sold out! Hello! I hope they increase their order for that flavor. While I was there, I did get some diet rootbeer (again, by Hansen's) for George--that's his favorite flavor, as well as some diet gingerale (guess who) for me. I'll be back for the pomegranate!
Posted by Lesley Looper at 6/01/2008 No comments: