Last night at our ERUUF Covenant Group meeting, we had an interesting discussion about rituals. I've missed some of the Christian church rituals I grew up with since attending ERUUF, but I've come to realize that rituals and traditions can take time to sink in and become part of me.

George and I used to have some rituals: listening to "A Prairie Home Companion" on NPR, watching "M*A*S*H" together on Saturday mornings and "ER" on Thursday nights. As he pointed out in last night's group discussion, we don't have those rituals anymore as life has gotten busier. I hope we can find some new rituals in time.
Posted by Lesley Looper at 1/23/2007 No comments:

George and I had a busy, but fun weekend. Saturday and Sunday we looked at some apartment complexes together, which was fun for both of us. We're both looking to move in June/July. Saturday night and Sunday morning we attended ERUUF events that made us feel like we got our culture for the weekend! One was an event called Cafe ERUUF, at which members volunteer (ahead of time) to share a talent with the audience. Acts ranged from singing to piano and guitar playing to storytelling and poetry reading. It was delightful, and I wish we'd been attending those all along. (Cafe ERUUF happens every couple of months or so.) Sunday after church one of the ministers showed pictures of her recent visit to the Republic of Georgia. It was fascinating to hear her stories!
Posted by Lesley Looper at 1/22/2007 No comments: 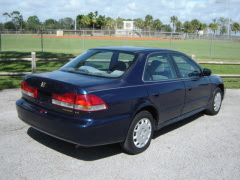 I picked up a "new" car Friday night at the local Honda dealership, another 2001 Honda Accord LX, like the picture. It feels like home, being back in another '01 Accord, same trim level, too! It does have side impact air bags and alloy wheels, which my other '01 Accord didn't have, but otherwise, it's pretty much the same car., just a different color and a few more miles. It seems to have been well maintained, for which I'm thankful!
Posted by Lesley Looper at 1/16/2007 No comments: 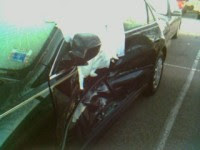 I went by the body shop to clear out my totaled car yesterday. It was a relief to get my belongings (nothing valuable, but still...), but sad too. It served me well, and I was looking forward to driving the car for a long time.
I got the check from the insurance company today, and it looks like I'll have another Accord this evening. I drove another 2001 model at the local Honda dealership last night, and it felt like home.
Posted by Lesley Looper at 1/12/2007 No comments:

I found out yesterday that my car is totaled. I'm a little sad, but also a little relieved, since I'll be able to get a new car faster than my old car could've been fixed. I'm still waiting to hear back from the insurance company about how much I'll get for my car. Hopefully I'll get word today and be able to start car shopping tonight after work. I'd like to get another Accord, or something similar.
Posted by Lesley Looper at 1/09/2007 No comments:

In addition to the personal finance book, Start Late, Finish, Rich, mentioned in an earlier post, I'm also reading a fiction book, The Eyre Affair, by Jasper Fforde. It's a delightful book--a combination of mystery, sci fi/fantasy, and history. The protagonist in this first book of the series (set in England) is named Thursday Next, a Special Operative in literary detection. Other character names in the book are similarly querky. :) I look forward to finishing this book and continuing the series.
Posted by Lesley Looper at 1/04/2007 No comments:

Catching up on the holidays

I realized after my New Year's Resolutions post that I hadn't updated here on holiday goings on.

As I mentioned earlier, I stayed here in Durham for Christmas to stick with the Rice Diet. On December 23, I was in a car accident! Eventhough no one was hurt, my car was badly damaged, as was my ego. (The wreck was my fault.) My Accord is at the body shop, and as of Friday afternoon, they were still working on an estimate. They're closed on Saturdays, and of course yesterday was New Year's Day. I'm hoping to hear something soon, today or tomorrow.

On Christmas Eve morning, George went with me to Duke Chapel. It was beautifully decorated, and I really enjoyed the service. That evening, George and I attended two services at our church, Eno River Unitarian Universalist Fellowship. The earlier one, billed as a family service, was based loosely on Chris Van Allsburg's book, The Polar Express. The later service was more of a carol-singing service, with "Silent Night" by candlelight at the end. It was great for my spirits. Christmas Day morning, we went to St. Philip's Episcopal Church in Durham for the Holy Eucharist. It was a small turnout, but it felt good to go and have communion and reconnect on that level. It made me miss the rituals in the Christian church, and has me wondering how I can find a balance. I do enjoy going to Eno River UUF a lot.

George went with me to the Rice House for lunch on Monday. It was nice to have him to eat Christmas lunch with, eventhough the lunch was unusual by most Christmas meal standards, and I missed the rest of my family.

George is Jewish, by the way, so he was a great sport with all the church services. He considers himself a Unitarian-Universalist now, so he took it all in stride.

On New Year's Eve, we went to Mike and Suttee's house again to play cards. It was a lot of fun to catch up with everyone. Suttee and Mike hadn't seen me since the hospital, and everyone else I hadn't seen since at least last New Year's Eve! They ordered pizza from Papa John's, but I ate my Rice Diet supper before we left and took a raw veggie tray with me.

Yesterday, on New Year's Day, we went to an open house thrown by George's uncle and aunt, Howard and Nettie, and some long-time friends of theirs in Raleigh. It was good to see George's family there and meet some new people. I nearly wiped out the raw vegetable tray there!
Posted by Lesley Looper at 1/02/2007 No comments:

I'm working on my list on New Year's Resolutions, and the big one this year (aside from continuing on the Rice Diet) will be to improve my finances. This is a big stepping stone to other goals in my life, like moving to a better apartment and eventually owning a home, being able to travel more, and being prepared for a wonderful retirement!

To help me along, I've picked up thhe book, Start Late, Finish Rich, by David Bach, again. I started it a year ago, and got just a few pages into it. With everything going on this year, I'm probably not in much better financial shape than I was a year ago, because I haven't given it much attention. I've been coasting along, by and large, just taking care of basics and not thinking much about the future, financially. I did increase my automatic contribution to my retirement account earlier in 2006, but otherwise I just let it sit. Am I investing wisely for retirement? How much do I want to save for my first home? What's my credit score? Lots of things to decide. I'll start my balancing my checkbook today and work on a gameplan!
Posted by Lesley Looper at 1/02/2007 No comments: