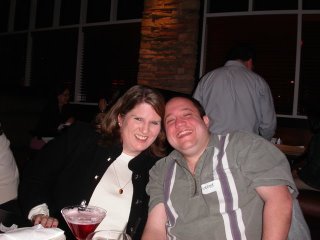 This picture was taken in February of this year at one of our favorite restaurants, the Stonewood Grill in Cary. It was an outing of Triangle Friends, a group I moderate on Yahoo. The moderator title fell into my lap nearly 4 years ago, about the time I met George. The outing had a pretty good turnout--about 10 of us were there and we had a fun time! Interestingly enough, everyone who came knew someone there, so there weren't any totally new people there. One of the reasons most join Triangle Friends is because they want to make new friends, but I think there is a certain amount of need for a comfort zone.

Since becoming moderator of the group, life has gotten busier on several fronts, so my efforts in building and maintaining the group have been up and down. Still, I'd love to see the group become a way for people in the Triangle to connect and feel a sense of community.

There was a study published recently that a Duke professor participated in that said that Americans have fewer friends than we used to. It's been on my mind a lot lately, as I try to juggle everything and work on building relationships. It's definitely more challenging to build good friendships than it used to be, but it's worth the time.