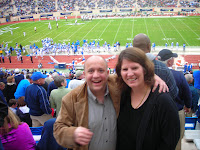 Boy, we've had a busy weekend! We didn't plan for it to be so busy away from home--it's just worked out that way so far.

George and I attended the Duke-Miami football game this afternoon, and my mom took a picture of the two of us to commemorate. Duke had a really good first half, but things started going downhill after the break, and Duke lost 49-31. Oh well. One of the highlights there was getting to meet the father of Desmond Scott, a top running back in North Carolina, who plays for Hillside High School in Durham and has committed to Duke for the next school year. (Wish he could've suited up this afternoon!)


Before the game, the Duke Libraries sponsored a Home Movie Day, where people from the comminity could bring old home movies to show on a number of projectors set up in different sections of the Rare Book Room. I let Mom know about it before they came to town, and she brought 30-40 old 8mm and super 8mm reels of film to show. George and I joined her at the library, and got to see a number of the films. It brought back a lot of old memories, including vacations to North Carolina and Disney World (this is when I lived in Alabama), birthday parties, holiday celebrations, a ballet recital, Girl Scout camp, church youth group, various pets, a Japanese tea party, and family get-togethers. (And those were just the films we had time to see before the football game!) Mom got some good advice and a recommendation for someone local who will transfer the films to DVD, and I really, really hope she does it!

Last night, George and I joined his family for a spur-of-the-moment dinner in Cary, which I really enjoyed. I happened to sit next to Papa, George's grandfather, at the dinner table, and he shared with me a story about his then-girlfriend (later wife for a gazillion years until she passed away earlier this year), whom he took barnstorming in Black Mountain while they were still dating. She didn't tell him until afterward that it was her first airplane ride! That was an interesting insight into her personality.
Posted by Lesley Looper at 10/18/2008